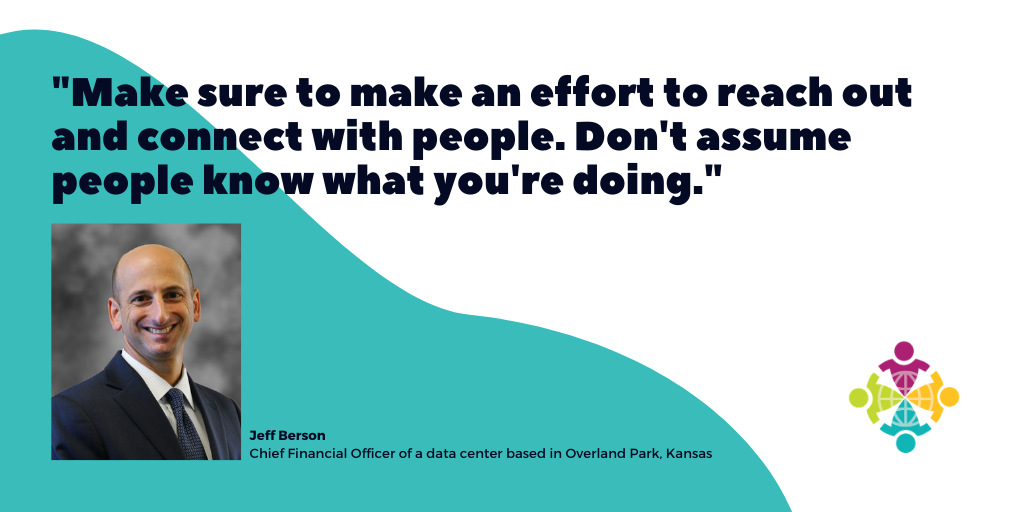 Jeff Berson is the Chief Financial Officer of a data center based in Overland Park, Kansas. Prior to the COVID-19 pandemic, Berson commuted to Kansas from New York three Mondays a month. Now, he works full-time from his home in Westchester, New York.

Thank you, Jeff, for sharing your pandemic journey with us!

Before the pandemic, Jeff Berson flew from New York to Kansas three Mondays a month, staying until Thursday. When in New York, Fridays through Sundays, and every fourth full week, Jeff worked in his home office. Jeff still works long hours, but since the pandemic began, he no longer spends hours each month traveling.

Jeff spends most of his time on the phone or computer speaking with colleagues, as he did prior to COVID-19. But Jeff has seen a significant shift in these communications. Prior to the pandemic, people did not use video conferencing as much, but now people turn their cameras on. While he had worked at home before, Jeff finds he’s “better at working from home since the pandemic.” He says, “I can still be very effective from home.”

Jeff’s favorite thing about working from home is the convenience, but he “misses the in-person social interaction.” He continues, “Brainstorming and communicating were more effective in-person.” In some respects, working from home is more productive for Jeff. There are no in-person meetings and it’s great for producing short-term deliverables. He is concerned, however, that with people working at home, there is “less focus on long-term deliverables, brainstorming and strategizing.”

In Jeff’s job, he is “always on,” so he hasn’t found any change in boundaries between his professional and personal life. His employees, however, have mentioned they are experiencing a blending of work and personal during the pandemic for the first time. Jeff says, “Employees are working a lot more hours and are worried about burnout or fatigue.” He lets them know “we understand how hard they’re working.” Leadership at his company has been adamant about “finding ways to help people with kids, encouraging people to take vacation even if it’s at home, and communicating that we know they still need to have personal time.”

In the beginning, Jeff “focused on overcommunciating” with those he supervises, as “no one knew how the work-from-home experiment would go.” He found over the first few weeks, people worked well and efficiently from home, so he “cut back on those mandatory communications, giving people more working hours.” He notes, “People focus on near-term obligations and not long-term. When you’re in an office and finish the near-term, you talk to people about the future. Now, people may mistakenly think they are as productive at home because they are getting things done, but that big picture thinking and collaboration isn’t happening.”

For Jeff, COVID-19 has emphasized “the value of seeing people, even when communicating through technology. If you see someone, it’s easier to engage with them.” He appreciates “the level of connectivity on video.” Jeff says, “It’s crucial to reach out and connect with people. Don’t assume people know what you’re doing. Make more direct efforts.” And lastly, he says, “When you have the option of clicking video on, put it on.”