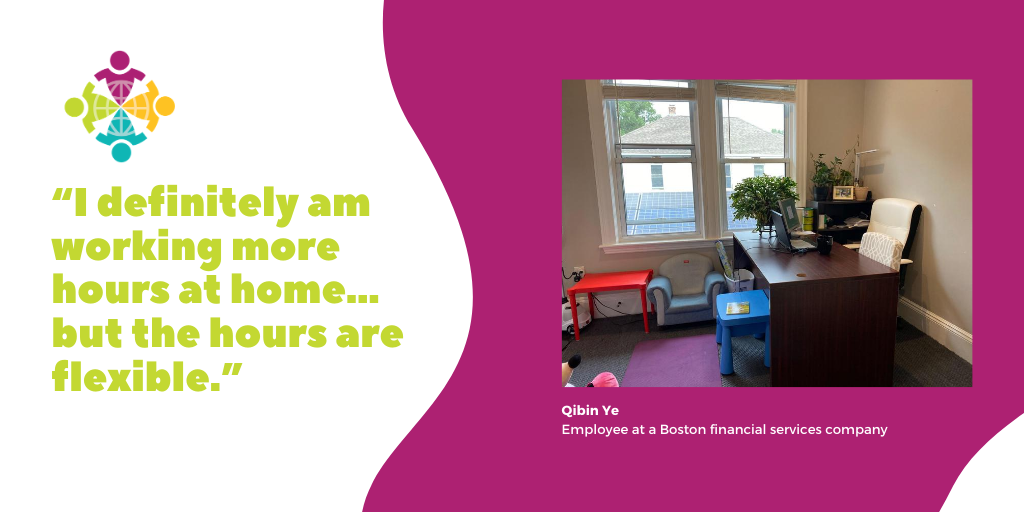 Qibin Ye is an employee at a financial services company in downtown Boston, MA. Due to COVID-19, Qibin has been working at home in the suburbs of Boston for the last several months. Below you will find how Qibin adapted to his new work environment and balanced his personal life with his work.

Thank you for taking the time to speak with us, Qibin! We hope you and your family continue to stay safe and healthy.

Qibin Ye’s company shut its doors in March, just days before Massachusetts went into lockdown. He and his colleagues “didn’t have a lot of time to prepare.” Although his workplace offered the option for employees to go into the office as needed for the first few weeks, Qibin opted to stay home due to safety concerns. Prior to COVID-19, Qibin had only worked from home on days that he had other obligations, such as doctor appointments. When considering his remote work experience prior to the pandemic, he “preferred to go to the office…and saw remote work as less effective.” During the shutdown, Qibin came to see remote work in an entirely different light.

At first, the tech was a challenge

During his first few weeks working from home, Qibin encountered an array of challenges. Most notably, he faced countless technological issues, – “remote access, internet issues, and meeting issues.” With so many company-wide demands from the IT department in the early days of lockdown, it was difficult for IT to respond to individual problems promptly. Qibin’s manager, however, was incredibly understanding when employees faced technological difficulties and acknowledged that the transition was difficult for everyone.

Qibin’s toddler daughter wanted to work with her dad

Another challenge he faced was his work-from-office “office mate”. Qibin had to share his makeshift workspace with his one-year-old daughter. He was grateful to have an unused bedroom in his home that could be converted into an office, but part of the room was also designated as his daughter’s playspace. Qibin saw it all happen around him. “She’s started walking and wanting to interact with people.” At just one-year-old, his daughter knew that Daddy was “in the office and she would knock on the door and come in” wanting to play. While this could be “a little bit challenging” when trying to get work done, Qibin fortunately could rely on his wife and his mother for support.

His new workspace also lacked the same tools as his former space, like a scanner and high-tech printer. However, he doesn’t think that his work days are “any less efficient, now. If anything, I think we’re more efficient because we spend more time on the computer and less time doing other things.” In fact, Qibin finds the same level of interaction between he and his coworkers, especially now that “IT has become familiar with the usual “at home” IT issues and can resolve them faster.”

Qibin has found that, overall, he is “definitely working more hours at home… but the hours are flexible.” He likes the flexibility because it allows him to spend more time with his wife, mother, and daughter. During COVID, He has been waking up at 5 am, four hours earlier than usual, to get work done before his baby wakes up. He takes a break during the middle of the day, and then gets back to work until 5 pm. Despite working longer hours, Qibin notes that the leadership team is incredibly understanding, as they have children, too. “He told us that if we ever need to run out for necessary errands during the workday we can… and catch up with work later.”

On a more personal note, this empathy has allowed Qibin to be there for his family, especially his mother who has had three Beijing flights cancelled. She is in limbo, stuck in Boston for the foreseeable future. Pandemic-related obstacles aside, Qibin has had a “very good experience” having his mom live with his family. Together, Qibin, his wife, his mother, and his daughter have been enjoying regular home-cooked meals and going on regular walks. Despite no longer having his usual gym routine of splitting his lunch break into a workout and eating, Qibin strives to take walks regularly because not working out “affected his mood and overall well-being.” As a hobby during quarantine, Ye enjoys gardening and has redone his entire front yard.

As a piece of advice to those entering remote work for the first time, Qibin suggests trying to be as prepared as possible, having support at home to rely on, and devoting a private space to work, which is especially important for those who need quiet to focus. As for going back to the city for work, Qibin is in no rush, as he wants to be sure it is 100% safe to do so. To his surprise, he has really enjoyed working from home and that the pandemic has given him much needed flexibility in his work life.

Qibin’s biggest takeaway from COVID-19 is the importance of staying positive. With “so much going on in the world,” it’s “hard to stay positive all the time but it’s always a good thing to try.”