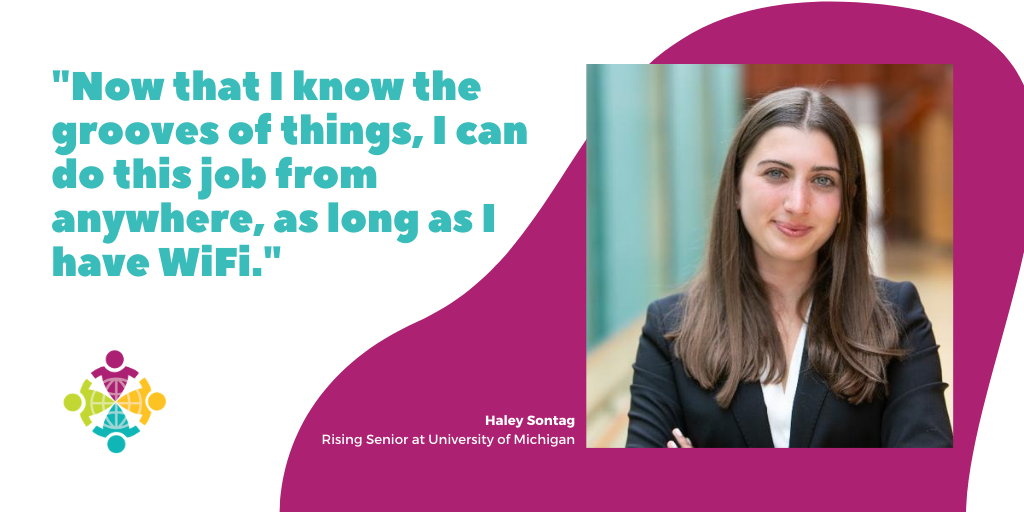 Haley Sontag is a rising senior at the University of Michigan, majoring in Sociology. She is currently working from home in Westchester, New York, but her COVID-19 experience started in Europe during her semester abroad. Now, she is working for PlatformQ Education, a technology company focused on connecting students with colleges and universities.

We got the chance to hear from Haley about her rollercoaster of a semester, and how she secured a remote internship despite the uncertainty happening around her. Thank you, Haley, and we wish you the best senior year!

When Florence, Italy felt the devastating impact of COVID-19, Haley Sontag’s semester abroad at Istituto Lorenzo de’​ Medici came to a shocking close. “I woke up to a text from my mom, a travel agent, telling me I had been booked on a flight to London and that I should pack up my entire apartment.” Thankfully, Haley was able to stay with a friend (yours truly!) in London for a week while she figured out next steps for going back to the United States. Sontag was already in the air on her way back to New York when the United States Government announced that non-American citizens were not allowed in the country. “To say the least, I was thankful to be home.” However, she felt uncertain about what the future would hold.

A remote internship was hard to find

Throughout her semester abroad and her first few weeks of quarantine, Haley actively sought out summer internships. While she “didn’t have any plans set in stone,” she was determined to continue with the interview and application processes for various different companies. Come the end of March, it became clear that “most of these programs were not happening, and that people were losing the internships they did have.”

At the beginning of April, a friend reached out to Sontag about a summer job opportunity. PlatformQ, a company based in Needham, Massachusetts, was looking to hire an interactive marketing intern to help with the education side of the business. The role involved helping the company’s accounts, namely universities and colleges, connect with student audiences via emails, texts, and virtual events and increase engagement. Haley had an interview on April 13th and began working the next day.

Even in remote work, people make or break the job

Over the last few months, Haley says “it’s been an amazing experience” working for PlatformQ. It’s a small company, with only thirty people on Haley’s team. She has been able to connect closely with many colleagues and loves the people with whom she works. Although COVID-19 changed many people’s work environments, PlatformQ has always had many remote team members. Haley notes that one VP is based in California and another is based in Maine, even though the main office is in Massachusetts. In fact, this past quarter was the company’s best one yet, as their virtual outreach programs for higher education are needed now more than ever before.

Since employees of PlatformQ are “used to remote working full time,” onboarding was “very smooth and easy” for Sontag. Despite never having met them in person, Haley really likes the people she works for and thoroughly enjoys her work days, which usually span from 10 a.m. to 5 p.m. each day. During her first weeks of working, she worked strictly at her desk in her room and “only left for twenty minutes at lunchtime.” But, Haley says, “now that I know the grooves of things, I don’t have to report to my manager everyday, so I can do this job from anywhere, as long as I have WiFi.”

Grateful for the remote internship and the people she’s met

When thinking about remote work in terms of her long-term career, Haley doesn’t think she could work remotely full time, but enjoys her current job more because it’s remote. “If I were in an office, I wouldn’t like my days as much because it would lack flexibility. The people I’m working for make it enjoyable virtually.” Sontag plans to continue with PlatformQ part time when she goes to school because she “doesn’t want to be that person that would leave them in the dust” without her help.

When thinking about her time working for PlatformQ, Haley is grateful for “having these people to have in my network for what lies ahead after graduation.” The biggest challenge for Sontag has been not seeing how other parts of the business operate. While she is familiar with what goes on in a “general sense,” she “can’t just tap someone on the shoulder to see what they’re working on” and is on her own a lot of the day.

Haley finds that it’s helpful “to have a good morning routine to encourage you to start your day off strong.” Her main takeaway from this time period has been that we need to “appreciate the small things” and “not forget about those dark months” in March and April. Haley is grateful for things like getting outside when possible and appreciating a hug from a loved one, both of which she says are “super important.”