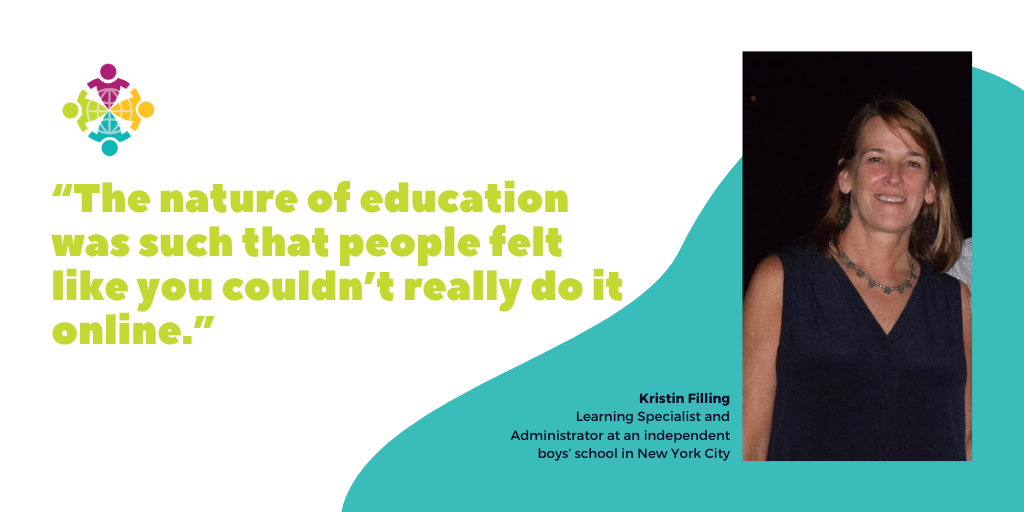 This Teacher Sees a Future with Remote Learning

Kristin Filling is a Learning Specialist and Administrator at an independent boys’ school in New York City. When her school made the transition to remote learning in March, Kristin had to quickly adjust to working from home, as well as develop a new remote curriculum.

Thank you to Kristin for sharing her experience with remote education and how she’s made the adjustment to working from home as a teacher and as a team leader.

As it became clear that the pandemic was not slowing down, teachers and administrators at Kristin’s school recognized the necessity of planning for virtual learning. Starting the week before they were set to go on spring break, Kristin and her team prepared for remote teaching, which she stated was unfamiliar at the time; “The nature of education was such that people felt like you couldn’t really do it online.”

Part of the challenge for Kristin and the other teachers was figuring out the best way to ensure that even young children remained engaged when learning online. As she works primarily with 8 to 10-year-olds, determining the best platforms and methods for teaching and distributing content for these ages was essential.

While conference calls and some virtual meetings were a part of her job before the start of the pandemic, the majority of Kristin’s work was done in person, working with students and other teachers. The move to remote work meant shifting to Zoom classes and planning virtual lessons and activities for the kids, which also meant sitting in a chair for hours at a time.

Thankfully, Kristin’s family was also engaged with their own remote work and schooling, which limited distractions at home. She was able to set up her own office space where she could field the constant calls she was receiving. “If I had young children I don’t think I could have done it”, she adds, laughing.

Kristin figured out most of the plans for remote learning on the fly, meaning that breaks in the day were rare. Because she dealt not only with other teachers and administrators but also parents who had their own work schedules, there was no real cut off point to Kristin’s workday.

The loss of her two-hour train commute was both a blessing and a curse, as it made separating work and home life all the more difficult. Kristin remarked that “I had this time that was very much my own where I could do computer work, et cetera, and then I didn’t have to do it on the other end”.

Learning from the experience

Despite the challenges of remote learning, Kristin has continued to learn from the experience. She believes the growing use of technology in teaching can be really useful, but that she may not have taken the time to develop her technology skills had it not been for the pandemic. She also appreciates the work her co-workers have put into building even stronger, more meaningful relationships that helped them all get through this big adjustment.

The future of education has definitely been changed by the rise of remote learning. While she doesn’t believe online schools will overtake traditional education, Kristin stated that “I think from now on this as a choice will exist.” However, she knows that many educators and students at her school are eager to return to the classroom as soon as possible as virtual learning can mean the loss of crucial socialization.

The continued uncertainty of the pandemic means Kristin has continued working through the summer. Creating stronger boundaries around her working hours, however, has become a priority for Kristin no matter what. It’s also her biggest tip for others in a similar position.