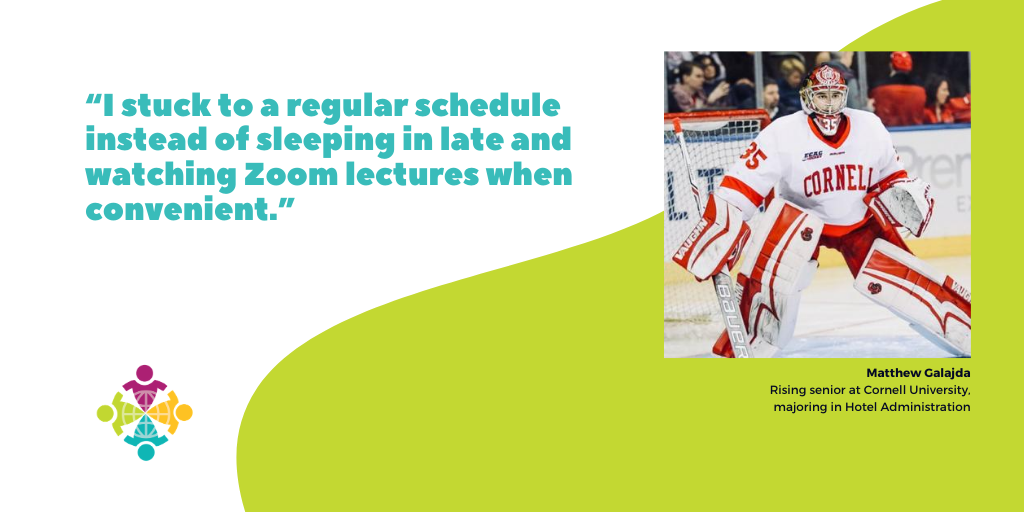 COVID-19 Shortened His Season, but This Goalie Adapted

Matthew Galajda is a rising senior at Cornell University, majoring in Hotel Administration. He is an All-American starting goaltender for the number 1 seed Cornell Men’s Ice Hockey team. Matthew faced an abrupt end to his season because of COVID-19.

We spoke with Matthew about how he adapted to changes in the academic and hockey calendars. We also wanted to know what COVID-19 has taught him about resilience and adaptation.

As Matthew Galajda skated off the ice after a win over Clarkson University on February 29th, he didn’t think it was his last game of the year. The Cornell Men’s Ice Hockey squad refused to become complacent despite their #1 rank. They continued to train and practice harder than ever for the March 13 faceoff against Princeton in the ECAC quarterfinals. But the fear of a cancelled season loomed heavy in the back of Matthew’s mind in the weeks leading up to March 13th, as the news reported increasing spikes in COVID-19 cases across the globe.

Cornell cancelled classes and hockey, but the team adapted

Cornell announced classes would go virtual on March 10th. On March 11th, Rudy Gobert of the Utah Jazz became the first reported COVID-19 case in the NBA. Matthew knew it was a matter of hours before the NCAA suspended the rest of the hockey season. Matthew and his teammates were devastated because they had “worked so hard the whole season. To have the opportunity to compete in the championship taken away because of something outside of our control was upsetting.” Despite the physical separation, the team tries to get together every Friday night for Zoom calls. “We’re all going through it together. It’s been nice to have these conversations and just laugh like we’re still together at school.”

Matthew refused to let himself wallow. Instead, he focused on the fact that “life’s unpredictable. No matter what comes your way you just have to take it on and make the best of it.” Matthew says he made the best of his circumstances by “treating the suspended season as a longer off-season and focusing on my nutrition and off-ice training.” It just started “a little bit earlier than normal,” Matthew notes. After a three week break from courses to allow teachers and students to prepare for remote learning, Cornell began online classes on April 9th. Despite the season’s completion and lockdown in full swing, Matthew vowed to keep his same routine, “instead of sleeping in late and watching Zoom lectures when convenient.”

For his larger lecture-based courses, Matthew found that he didn’t get the “same quality education. It’s a lot harder to stay focused and engaged as you would have been in the classroom. It’s also harder to ask questions because there is no real personal connection, just the professor talking.” With his smaller courses, Matthew found he “continued to really enjoy it on Zoom. In my design class you got the chance to constantly collaborate with the other students and the professor. I got the same out of this class that I would have in person. If anything, it was more fun because we all got to talk more on Zoom than we did in class.”

Matthew prefers virtual classes on the smaller side, but class size is not a concern looking forward to the fall. Cornell has yet to release the course roster, but most of Matthew’s classes will be small because he’ll be a senior. Matthew made it clear that if Cornell is mainly online, he refuses to “substitute my learning for an easier or more fun class.” With only two semesters left of college, Matthew wants “to get everything I can out of Cornell.”

While the academic side of Matthew’s fall experience is still up in the air, he knows what to expect from hockey in the coming months. Recently, the Ivy League announced the hockey season cannot begin until January at the earliest. Matthew is disappointed but not surprised. He believes that other than playing games and taking road trips to other schools, “not too much will change. We will be working out and practicing as we would any other semester.” Matthew plans to “treat this as a longer off-season and as more preparation time for when the season comes.”